Is Pokemon Go a Security Threat? 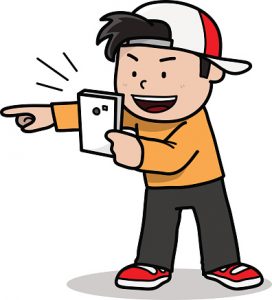 It’s all the rage these days; there’s no doubt that Pokemon Go! has hit it big with users. You can hardly avoid people gushing about their latest catches on a host of social media platforms, or perhaps you’ve seen them wandering the streets with smartphones in hand. Fun and games aside, this fun little diversion might just be more than it seems on the outside.

Pokemon Go! is a game run by the long-time reality augmentation gaming company Niantic. Upon starting the game, a user has the option to create a Pokemon account, or to simply link the game to their existing Google account. The temptation to use an extant login is great (who needs more passwords running around?), but it might be the root of some serious security concerns. While at first rumors ran rampant that Pokemon Go! would receive full access to a user’s Google information (including e-mails, access to Google docs, etc.), those rumors have since been lain to rest. That said, any third-party application piggy-backing upon an existing login (especially one so all-encompassing as Google) is sure to spell out security risks. Even if Niantic only wishes to access a corner of your Google data, the gateway to more will always exist. You’ve just given this company the keys to your Google kingdom. Perhaps even scarier, that doesn’t just ring true for Niantic; what if the company’s servers are compromised by hackers? What if an employee or someone who has lawful access to the servers decides to use that knowledge for unapproved reasons? Once your Google account has been opened to access, you can’t be certain where the access will go (and when it might end).

The trouble compounds itself when users begin installing “helper apps”; applications that claim to work with and through Pokemon Go! to help a player advance in the game. In this case, a user is not only dealing with Niantic and the “official” game servers, but also a host of unofficial (and generally unauthorized) servers that might come knocking at their Google information.

There are a few ways to fight back against these risks. Creating a secondary “dummy” Google account specifically for use with the game and unaffiliated with your general account is one way to lock down your vital (and personal) information. A second method would be to bypass Google entirely and create a Pokemon Go! account that might serve as your login. As always, should you choose to download auxiliary apps to go with the game you should do your research. Make certain the apps are from trusted sources (such as Google Play or the Apple App store). While shopping for apps, look for ones that boast many positive reviews rather than ones that seem to be in use by a small handful of users. Do a bit of snooping about the company running the helper app; can you find a website for them online? Do they seem to have a line of reputable products? Don’t trust your information to just anyone; and always be wary when it comes to your privacy.