Could There Be A Dinosaur Among Us Today?

Stranger things have happened – but in this case, we take a look at how the death of a Tyrannosaurus rex relates to your computer. 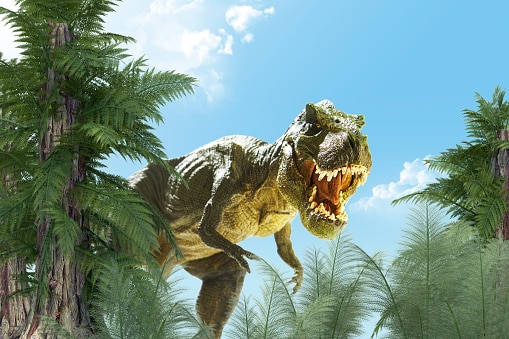 Sue Hendrickson was just poking around a cliff while waiting for a flat tire to be repaired when she made the most extraordinary archeological find of her life – or that of any to date. That hot summer day in 1990 in South Dakota, Sue stumbled upon the now infamous skeleton of a Tyrannosaurus rex, the most complete and best-preserved fossil ever discovered of a T-rex. The rather mundane series of events that led to this find only further underscore the mystery behind its existence.

Nicknamed “Sue” after the paleontologist that discovered the skeleton, the T-rex was found protruding from a cliff and was transported to a facility for cleaning and examination. Sue started to come alive again! Most of its teeth were still intact, and overall the skeleton was in incredible condition – not bad for being roughly 65 million years old!

What happened to Sue, the T-rex? How did she die? Was there a majestic battle to the death with another giant beast? Or was it much more boring and Sue perhaps died of what we today would call “natural causes”? Various testing proved Sue was about 28 years old at the time of her death. Small holes were detected in the skull that found Sue had a parasite akin to an ancient bird flu similar to an aviary illness today that is known to cause death by starvation due to neck swelling. Other stories of bodily injuries were told by the bones, but an exact cause of death was never proven. Scientists are good, but maybe not that good. Perhaps the “bird flu” saved Sue from a much worse fate, depending on your beliefs of the many claims of what happened to cause dinosaur eradication. The “giant meteor” (more likely an asteroid or a comet) is one popular working theory, and massive volcanic activity is another. No matter how it happened, more than half of the world’s species disappeared, leaving mammals, turtles, crocodiles, birds, frogs, and some sea life among others.

To better understand history, and also to prevent mass extinction from repeating itself, we devour information to educate ourselves on these creatures and maybe one day have an answer to what did happen. To get a picture of what we don’t know, we start with a picture of what we do know. To support the “giant meteor” working theory, data shows that metal only found in meteorites has been discovered all over the globe and shown to be the same age as the time when dinosaurs disappeared. Also, an enormous crater in Central America is roughly this same age. Coincidence?

The technology required to study the bones of dinosaurs and provide deep insights is equally incredible. It’s rather ironic to discuss technology and dinosaurs in the same sentence. Machines that are less than six months old are inspecting Sue’s bones, which are tens of millions of years old – and interesting paradox.

Speaking of technology, how old is your computer? You don’t need an X-ray to estimate its age – and if you have to think for more than a few seconds, your computer is probably too old. “Too old” – we sound rather harsh and judgmental when saying that.

Sound familiar? When was the last time you checked for system updates and ran thorough diagnostics? Outdated operating systems and applications can be super sluggish and even freeze. Letting security updates wait could put users at significant security vulnerabilities, leaving your computer open to hacks, viruses, malware, ransomware, or worse. Applications not kept up to date run slow and become “buggy”, where they freeze often or present glitches, losing valuable time and productivity – like Sue’s skull with the holes from the “bug” infection. For the record, holes in your skull are rarely a good thing…

Compare today’s computers, like the MacBook Air or the Microsoft Surface Pro 2, or the latest version of the Apple iPad, to the Tandy models in the early 1980’s. It’s pretty common to refer to those older machines as “dinosaurs” – but we think that insults dinosaurs! Even Sue still has something to offer. Sue teaches us about climate change, evolution, and even the food chain from her time. The Tandy models from the 1980’s have taught us that not everything is quite so black and white and that technology is an ever-evolving concept.

If you had a Tandy model today, what purpose would it even serve? It couldn’t run a word processor; nor could it support Internet usage for video streaming. That computer may as well be buried in the wall of a cliff in South Dakota, holding close its secrets for the future generations to learn about upon discovery by a (robotic) paleontologist.

Given how much technology impacts our daily lives, and how much we rely on software, the Internet, and all things digital, it’s pretty critical that we have a decent working model on which to rely. That’s not to imply we’re saying you should go out and purchase the latest model of the coolest gadget every six months – no, that’s excessive and wasteful spending. But what you do need to think about is how old your machines are, their current ability to function, and whether what you have is the best tool to do your job. Upgrades are expensive, but the cost of not upgrading is even greater. Slow machines equate to decreased productivity and efficiency, neither of which is a friend to business operations. Slow machines also translate into slower connectivity, slower email responses, slower sales proposal development and sharing. Bad, bad, bad!

A few things we can recommend to help get more out of your system:

These tips are just a few of the things you can do to keep your system running at its best, but the most important thing you can do above anything else is to keep aware of the latest technology available. Once a computer becomes obsolete, problems compound exponentially and users are faced with costly repairs or loss of time and resources in addition to the potential loss of data.

Avoid a fiery death for your computer and you’ll get more life out of it! Just remember, when it’s time to upgrade, do so before the giant crash to avoid using a dinosaur and a constant battle.