Are You Playing The Internet’s Latest Game Of Cops And Robbers?

Make no mistake – if you show the slightest bit of weakness around a bully, they will pounce. The Internet is no different, with hackers just waiting for a cybersecurity vulnerability to seize their opportunity. 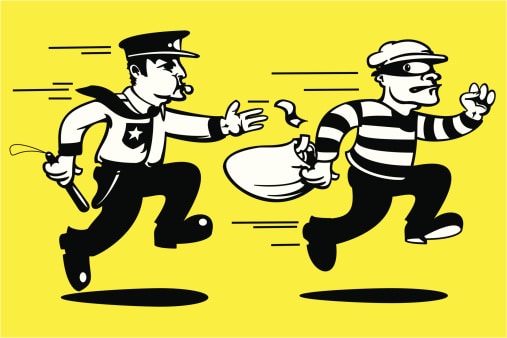 The latest form of cyberterrorism to take root and have explosive growth is incredibly dangerous. Forget about Trojan horse viruses and identity theft — well, not really, those are still a threat — but the hot topic today is cryptocurrency mining. This phrase is used in reports and articles all over the Internet, but what it means can vary.

Have you ever had a virus on your computer or smartphone? We know that pain. They range from annoying to debilitating and are time-consuming to eradicate. What’s worse is when we connect our smartphones via charging cable to a computer, and we allow access to our smartphone, we run the risk of inadvertently allowing the virus to transfer. Can we ever win?

Why are we talking about cryptocurrencies and viruses at the same time? Because you’d be amazed at what lengths cybercriminals — hackers — will go to accomplish their goal. Have you ever heard of ransomware? It’s a type of malicious software, “malware”, and sometimes more advanced malware is involved where the victim’s files are encrypted using code deployed by the hacker, called cryptoviral extortion. These all function the same as a basic virus, where an executable program is planted on a user’s computer with the intention of restricting user access in some way. With ransomware, to remove this restriction and regain access, the user is prompted to pay whatever fee the hacker demands — their “ransom” — otherwise the user’s data is blocked entirely and permanently. This type of extortion is being used more commonly in cryptocurrency mining.

How is this possible? We mentioned that the beauty of cryptocurrency mining is in automation. A cybercriminal gains access to a computer — without the knowledge or permission of the computer’s owner — and installs the software that runs the mining file(s). Has this ever happened to you? But…would you even realize it?

How do cybercriminals access a computer to fulfill their devious plan? Through dark and devious means in a dimly-lit basement at a desk filled with candy wrappers and empty cans of energy drinks? This isn’t a Hollywood film – it’s much more likely the cybercriminal is at a coffee shop or somewhere benign. They could be next door, across town, or around the globe from the computer that they’re hacking. While proximity isn’t meaningless, it’s far less necessary than it once was. The Internet has made consumers that much more vulnerable, and that much more valuable to a hacker. The sad reality is that the devices most consumers use to access the Internet — either wireless routers or networks lacking sophisticated means of protection — are the most common culprit. Most consumers don’t realize how important it is to established layered levels of cybersecurity protection at their home, nor do they understand how to go about protecting themselves adequately. This is something best left to the experts – especially if you need to establish this protection in your office, and it’s your business!

Still wondering why a hacker targets a personal computer for cryptocurrency mining? The answer is money. We can look at this from a few different perspectives.

The terms “cyberterrorism” and “cyberespionage” are just fancy ways of redefining a hacking situation that is getting uglier each year. The more sophisticated any cybersecurity network is, personal or professional, the more sophisticated hackers need to become in response. Adversely, the more vulnerable a network is, the more attractive the victim is to a hacker, and the more expensive the situation the victim is likely to find themselves in – repeatedly.

The value of cryptocurrencies keeps increasing, as well. Bitcoin is valued around $9,000, meaning that the cost to buy one Bitcoin is $9,000. A newer cryptocurrency, Monero, has increased exponentially in its first year. The value of Monero is lower than that of Bitcoin, closer to $250, but its newness also makes it more discreet. There is also value in mining early. Consider the price of an ounce of gold; the weight does not change, but the value of an ounce does, so buying one ounce for $500 and keeping that ounce until the value of an ounce reaches $1,000 gives a greater return on investment It’s ironic to be reading about legal investments in the same spot as cryptoviral extortion – but it helps law-abiding citizens understand the mindset of the cybercriminal. More importantly, the process to mine these isn’t the point: where there is money to be made by little effort, those with a serious lack of ethics seize the moment. Cybercriminals are evolving with cryptocurrency paradigm shifts, including fileless miners.

Yes, cybercriminals can now use wireless networks to access your computer and use your computer to mine cryptocurrencies without files. If a hacker can take over your computer entirely and require you to pay them real money to get your computer — and everything on that computer — back, how can you protect yourself?

Cybersecurity and protecting yourself isn’t just a case of setting a “really strong” password anymore. Some programs and platforms encourage — or even require — two-step verification processes for each login. The greatest advantage you can give yourself is teaming with the best cybersecurity partner and making all staff members aware of the risks. Let your trusted partner do what they do best — cybersecurity — and you can focus on what you do best: running your day-to-day operations.