With more than half of consumers aware of 4k televisions, and more than one third aware of 4k streaming services, it’s clear that the next generation of TVs is gaining acceptance. While new technology is prone to experiencing a roller coaster of momentum, the awareness and subsequent adoption of 4k sets is largely due to the improved value of the product in the minds of buyers. 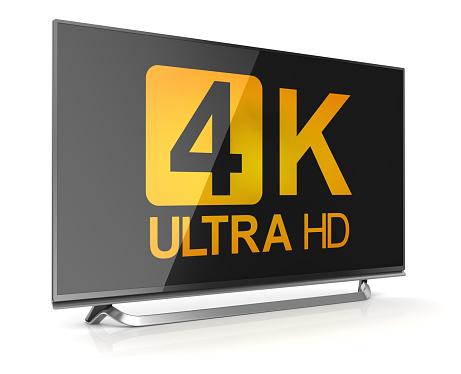 Costs Are Going Down

As with any emerging technology, the early adopters pay a premium for the luxury of ownership, but prices are beginning to fall like a rock. Two otherwise-comparable models of a similar physical display size, one 4k and one not, will often only have a fairly narrow price gap, and consumers are increasingly willing to make that leap in investment in exchange for the higher value given the clarity the sets can achieve.

As this trend in price dropping continues, it may even accelerate. With more buyers embracing the trend, prices will fall further as 4k sets become less of a leading-edge luxury and more of a commodity.

The namesake of the 4k format stems from the massive resolution bump. By packing in more pixels per square inch, the new resolution format creates roughly four times as many pixels in the images displayed. For two displays of similar size, this improvement in pixel density can mean a drastically improved image if correctly calibrated.

This allows the technology to reveal more nuance in the images, not only in television but in computer monitors as 4k screens help photographers better appreciate and manage their work.

It’s not all about resolution. Additional features like faster frame rates, improved contrast, and HDR create the potential for the richest, sharpest images ever conceived. While the number of pixels is certainly relevant, manufacturers are embracing the chance to bring the most feature-rich sets possible to market. When considered in contrast to the dropping price, prospective buyers are benefiting from the still-improving value of the purchase.

For some time, the 4k and Ultra HD Market was somewhat loosely defined, which created a confusing scenario for would-be buyers unable to easily conduct apples-to-apples comparisons amidst the marketing jargon.

The UHD Alliance, comprised of 35 companies in the film and TV industries, aimed to standardize the format to make it easier for content providers to work with these formats and remain confident that the finished product will match their visions. With their first wave of requirements now established, everyone in the industry can refocus on leveraging the capabilities of all the tools at their disposal.

The lack of content that plagued 3D TV is already being resolved! Because four times as many pixels means four times as much information, broadcast networks haven’t yet adopted 4k TV, though some content providers are starting to make the switch. Streaming services like Amazon and Netflix now have offer the ability to change plans for selected TVs, though a strong internet connection of at least 25 MBPS is required. That exceeds the download rate of most Wi-Fi routers, but a hardwired connection is usually sufficient.

As a future-proofing measure, many movies and high-profile shows are already being filmed in 4k. As the delivery method to the viewer is still being refined, filmmakers are ensuring that content will be ready to embrace the shift when the rest of the viewing public is up to speed.